If you ever in Kuala Lumpur, you can use the rail as it is the cheapest way to travel. There are 3 main railway network in Kuala Lumpur: RapidKL, KTM Komuter and KLIA Transit. Rail transit network, RapidKL and KLIA Transit (ERL) are usually punctual on time meanwhile local train network, KTM Komuter is often not punctual as the railway tracks are being rehabilitated for the time being. Also because of this the trains are running with less frequency, so check the timetable before using it.

These lines are operated by KTM, RapidKL and ERL in Klang Valley:

These are main rail stations in Kuala Lumpur servicing more than 2 lines and connection to other public transport:

How to identify the lines

These lines can be identified with their colours and name. As example KTM Komuter Seremban Line is coloured Blue and LRT Ampang Line is coloured Orange. And this is not very important but the word in front of the line name are usually the system used by the line. As example LRT Kelana Jaya Line use Light Rail Transit (LRT) system and MRT Kajang Line use Mass Rail Transit (MRT) system. Sometimes the signage toward the station only show this word, so if you know it will be helpful when you are trying to find the station.

Use cashless, get discount

You can use Touch ‘n Go prepaid card to make your travel more convenience since you don’t need to buy ticket every time using a train. Besides, you can get discounted fares if using cashless option. RapidKL, KTM Komuter and KLIA Ekspres/Transit support TnG cards at all stations. Passengers can purchase TnG card at RapidKL customer service counters at all LRT, MRT and Monorail stations or from TnG Hubs.

If not, how to buy ticket?

For RapidKL and KTM Komuter network, passengers can purchase travel tokens only at ticket vending machines at all station. Select rail lines and destination and pay with cash or coins. Meanwhile for KLIA Transit, you can buy tickets at ticket counters at all station.

For airport express train to Subang Airport (Skypark Terminal), passengers can purchase tickets at KTM Komuter counters at KL Sentral, Subang Jaya and Terminal Skypark station. For KLIA/klia2 (Kuala Lumpur International Airport), passengers can purchase tickets at counters and ticket kiosks at all KLIA Ekspres stops or by online. There are 10% discount for tickets bought online.

KL TravelPass is a smart payment card that you can use to travel on rail public transport in Kuala Lumpur. The enhanced card includes KLIA Ekspres airport transfer (Single or Return Trips) and 2-day unlimited rides on RapidKL rail services (LRT, MRT and KL Monorail lines). You can purchase it at KLIA Ekspres counter at:

There are train service for long distance journey to outside of Kuala Lumpur city. The service are provided by KTM (national railway company) and called as ETS. Refer KTM’s website for timetable.

The major routes for ETS trains are:

How to buy ETS ticket

RapidKL provides feeder bus services at all their MRT stations. Fares for all MRT feeder bus routes is RM1 and only accept cashless mode for their fare payment. You can use Touch ‘n Go or MyRapid card. Meanwhile, feeder bus for LRT stations are coded T in front of their route number. RapidKL bus also only accept cashless mode for their fare payment. When entering the bus, you need to tap the card and RM3 will be deducted from your card. Maximum fare RM3 will be charged if you do not tap out when disembarking the bus.

Passengers can connect between rail and other modes of public transport such as intercity bus, ferry and airport in Kuala Lumpur very easy as there are link bridge provider between these terminals.

These are stations with connection to other public transport: 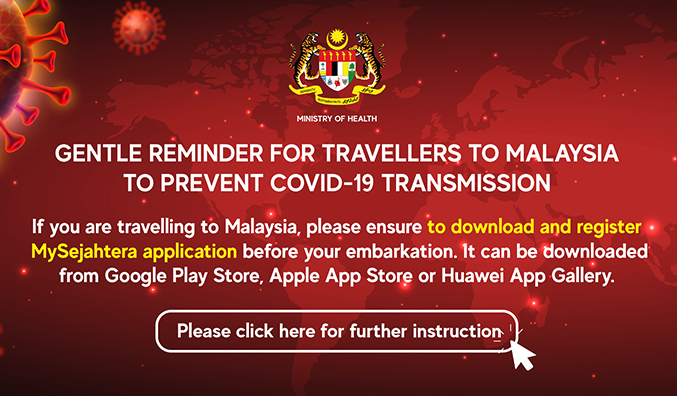 There may be some information that have been changed in past few months because of the restrictions and preventive measures taken by the government and owners. Please contact respective hotel, resort or chalet to get the latest information.